This week's submission (although by this I of course mean last week) is not one, not two, but three zombie spawn points: 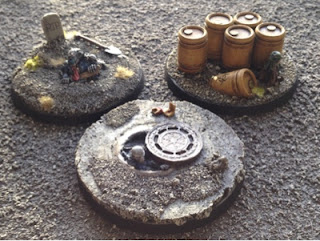 Many, many moons ago, I was writing a set of zombie rules, featuring simple, convention suitable rules, and a deck of zombie cards to decide what type spawned. Alas, the laptop that had the half-finished rules on died, but I still have a bunch of ideas rattling around in my head (there were rules for things like survivors accruing noise tokens for doing things like shooting or using a chainsaw), so maybe one day I'll get around to redoing them... One thing from that is zombie spawn points, hence, I made these!

Originally, I'd made and undercoated one a couple of years back which I thought I'd dig out, but I fancied building another to go with it. 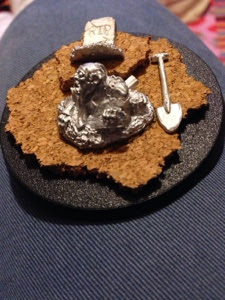 Having a dig through some boxes in the garage, I turned up a zombie bursting out of the ground from an old Frothers set, and a gravestone and spade from a Heresy ghoul pack that I apparently overlooked when I made my graveyard a couple of months back. Some torn up cork built up the base after a quick dry-fit, then it was time to crack out the glue. 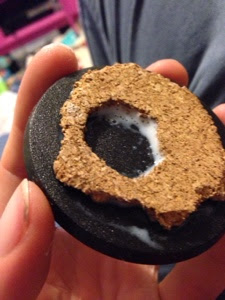 Superglue just disappeared into the cork, so I busted out the white glue (although I did splash a bit of superglue around the edges to try and toughen it up somewhat). 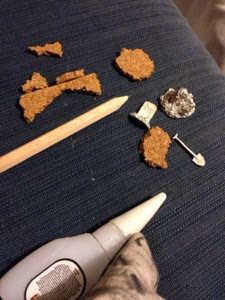 Once the glue had dried, I dry-fitted the zombie into the hole I'd cut to make it look more like it was actually bursting out of the ground, but the thickness of the cork if used was a little more than I'd originally estimated, which made the figure look a little silly, so I grabbed a coffee stirrer to make an impromptu riser: 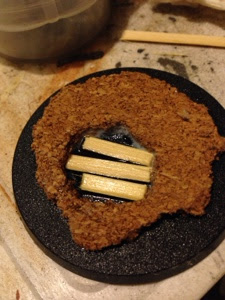 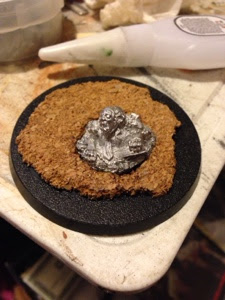 I then added the second piece of cork, and pinned the gravestone to the base for stability (as as previously mentioned, the cork pretty much drank superglue) 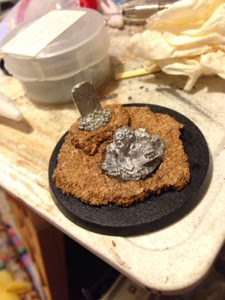 I then used some pre-mixed filler (that I'd originally picked up from pound land with the intention of making some generic rubble piles with) and smoothed out the steps so it wouldn't look like the grave was on a rocky crag: 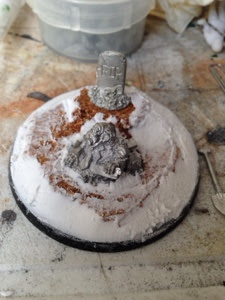 My secret weapon in this (and also now in applying glue to bases, rather than using a cut down matchstick or ruining an old brush as I previously had been) was a pack of glue spreaders from the children's stationery aisle in Wilkinsons! 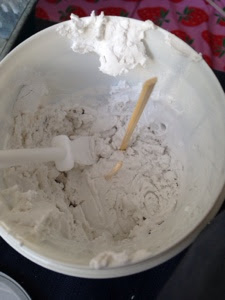 It was at this point that I thought 'hey, surely I could make and paint another spawn point just as easily as the ones I've already got on the go, right?'
I'd had ideas for a couple of different spawn points floating around my head for a while, and knew I had the bits for at least one of them somewhere, but all I needed was another 60mm round GW base... Next time we went into town, we nipped into the shop, only to discover that 60mm rounds are now a web shop exclusive, and don't come in the mixed packs that I'd previously seen in-store.

Until a day or so later, when I thought to myself 'wait, don't I have an Imperial Guard Heavy Weapon Teams boxed set still complete in box from that time several years ago that I impetuously decided that I was going to build a converted Blood Pact army and went on a spree in GW somewhere' and the answer it turned out was yes, yes I do. Plan back on! 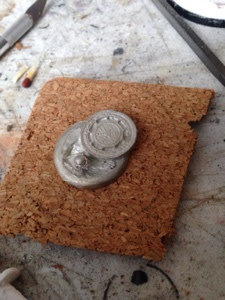 This one was planned to be fairly simple, a zombie climbing out of a sewer. The figure is from Black Cat Bases, bought many, many years ago (before their current troubles, which hopefully seem to be getting better?). A quick application of a file to the tops of the ears to round them turned the ghoul into a perfectly passable zombie.

After cutting out the hole for the miniature to slot into, I originally planned to cut the cork to shape having marked the circumference of the top of the base on it. After cutting out a fraction of it though, I thought it might be better to stick it to the base, and then use that as a guide to trim it like you would the pastry lid of a pie! 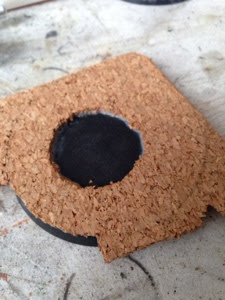 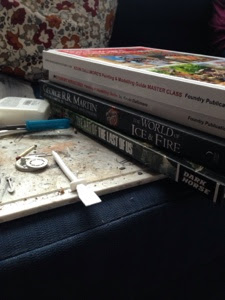 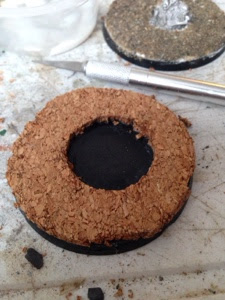 And with sewer miniature in situ: 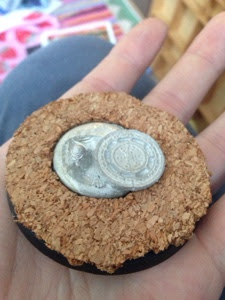 At this point, my daughter decided that the spawn point in its current state of completion looked rather like the oaty rings that she likes to eat, and tried to do so. We agreed to disagree on this point. And a little more pre-mixed filler to smooth the transition from cork to miniature: 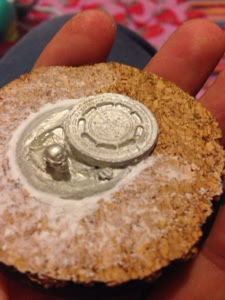 It was at this point that I realised I was a little unhappy with the miniature - the sculpt around the figure was a little rough and ill-defined, so I had a crack at it with my trusty not-dremel to excise the unwanted material. 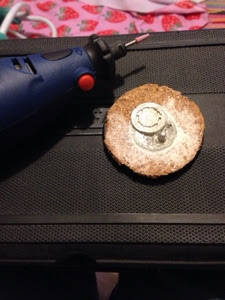 Pow, it looks more like he's actually in a hole now! 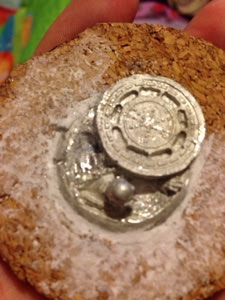 Admittedly, I actually dremelled right through the metal completely in one spot, but that's nothing that a spot more filler doesn't fix!

With my two bases ready to go, it was on to sanding (thank you trusty glue spreader again!) and the addition of the spade left over from a Heresy ghoul pack (the King I think? He's undercoated somewhere, I should really get round to painting him one of these days...) 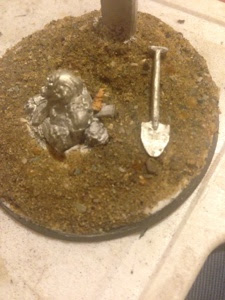 I didn't cover the entire base of the sewer  spawn point, as I wanted it to look like Tarmac with some loose debris and rubble, rather than a random manhole in the middle of a gravel field. 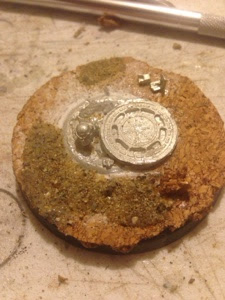 You'll also notice in the picture above, I added a couple of extra details - a chunk of cork from one of my baggies of different grades and thicknesses of cork off cut for a larger chunk of rubble, and some metal details - a discarded set of burger and fries cartons, again from Black Cat Bases (expensive for what they are, really, but I quite enjoy them really!) 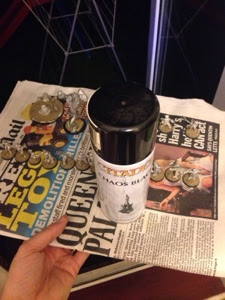 Then, for the first time in years (as I had a ton of things to undercoat at once), out to the garage with the first episode of the Dungeonpunx podcast to spray! (Ignore the Daily Mail, we bought it back in May for the free Lego and have kept it for spraying or if we were to need to start a fire). It's weird how my undercoating habits seem to move in cycles - spraying for maximum convenience on a number of figures, to getting annoyed at having to touch up the bits that have been missed, to gesso, to getting lazy and applying it too thickly and moving to brush-on primer, and so the wheel continues to spin...

Then I painted them, which I didn't take any step by step pictures of because who wants to see that! 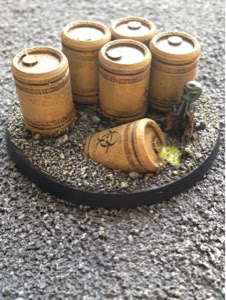 This is the original spawn point I built a few years back - some Biohazard barrels from Fenris spilling their radioactive payload (because in the worlds of imagination, radioactive material gives you cool mutations rather than cancer), as is the case with this poor cat, who has lapped some up only to develop a cthulhuesque head and tiny wings! The cat was a freebie from Black Cat Bases, and the spilled goop is a base of GW Typhus Corrosion, followed by Nurgle's Rot, PVA glue to try and give it some structure, and then even more Nurgle's Rot! 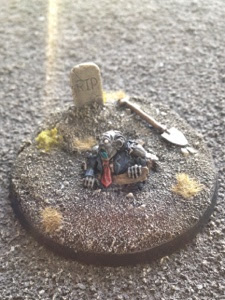 This spawn point got a little moss and grass, and is done. Trivia - the zombie pulling himself got a Sotek Green tongue at my wife's suggestion, after I bought up the colours I'd need to paint Boba Fett's helmet according to a series of Youtube instructional videos should I ever get round to building my Knight Models miniature (but that probably won't be until I've painted the other two bounty hunters, and I am sadly still lacking a WOTC Zuckuss miniature...) 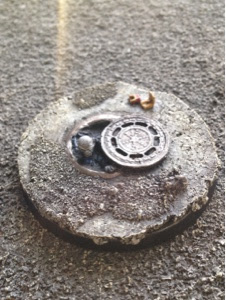 Last but not least, the zombie popping out of a sewer spawn point - dry brushing and washes a go-go! The discarded food items got a colour scheme to indicate that their previous owner might have been loving it, and that was that! I briefly considered adding a splash of gore to this figure, to try and hide the fact that it's face looked a bit ghoulish rather than zombie-like, but decided against it as I liked the way the teeth had come out too much!

Finishing these (yes, I'm counting them each as a finished figure!) brings the tally to:

So, with just one week left of Zomtober (not that I've hit any deadlines so far, and everyone else seems to be stopping at week 4), I've got a couple of ideas for a finisher - If I can pull it off in time, I could have a biggie (although I also have a backup plan just in case!)