Describing Zomtober to my wife, she said 'five zombies in a month? You can do that surely?'. I suggested that if I was quick I could probably order some zombies so that I'd have something to paint, to which she replied something along the lines of 'pull the other one, it has got bells on' (but hey, I thought I'd chance my arm in the hopes she'd forgotten how many unpainted zombie miniatures I own). 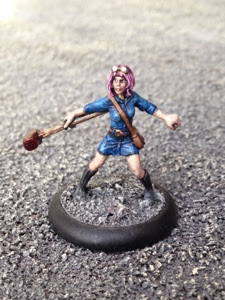 My tiny wife! No, not the short novel by Andrew Kaufman, a Hasslefree miniature survivor painted up to represent my wife on the tabletop (although admittedly she doesn't currently have pink hair). She thought it a little bit weird at first that I was making a tiny version of her (my explanation that that way I could have her fight zombies or monkeys for my amusement might not have helped) but was soon more amused as I got her to choose what colour each thing on the miniature would be, and started singing Peter Gabriel's 'Sledgehammer' whilst imagining  what she'd do in the event of a zombie apocalypse in which she was in possession of the titular tool... 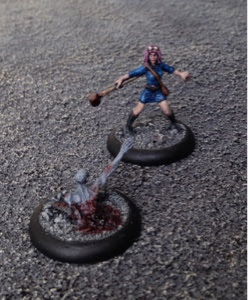 So there you have it! I've never made a miniature version of myself (except for a torso held by a zombie brute that has a tiny Rival Schools shirt and dragonfly tattoo) but I may have to at some point now!

Painting this takes the Tally to: