Whilst working on my Frostgrave warband, I also had this burly froggy chap on my painting tile: 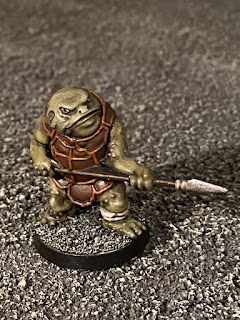 A Bullywug thug, who as well as menacing adventurers in D&D will also be a thug in my starting Frostgrave band. I hadn’t originally planned to use him when setting out the minis to paint, but one of my initially selected minis in hindsight isn’t really dressed for exploring a frozen city, and looked a bit out of place next to the rest, whereas this muscular frog chap looks just like the sort of hired muscle that might sign up with an unscrupulous Necromancer! 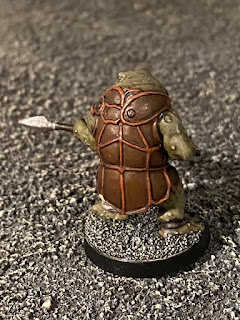 He’s a chunky little mini, and in hindsight I wish I’d taken a picture of him next to an average human mini so you can see that he’s taller and broader than his chums are going to be. Looking at these pictures. I wonder if I should have done something else with his armour, but perfect is the enemy of done as they say. Tried to copy the pupil style featured in official art too, which actually came out looking vaguely how I wanted, which was a pleasant surprise.

With his completion, the Tally now stands at :

(Mostly because I’ve been holding fire on spending Christmas money on new toys, despite watching YouTube videos to broaden my knowledge of Napoleonic war gaming to prepare myself for the Silver Bayonet leaving me with the urge to buy several hundred Perry Miniatures that I’ll never finish painting)

And updates the Monstrous Alphabet to this:

A is forB is for BullywugC is for Carrion CrawlerD is forE is for Elemental (More than one)F is for FlameskullG is for GoblinH is forI is forJ is forK is forL is for LichM is for Mind Flayer, Myconid, MummyN is forO is for OwlbearP is for Purple WormQ is forR is forS is for Shambling Mound, Scarecrow, SkeletonT is forU is forV is forW is for WraithX is forY is forZ is for Zombie