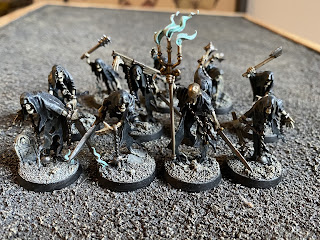 A bevy of spooky chaps have made their way off my painting tile! 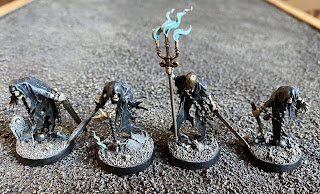 They’re Chainrasps from Age of Sigmar, that came on the front of a magazine ages ago. 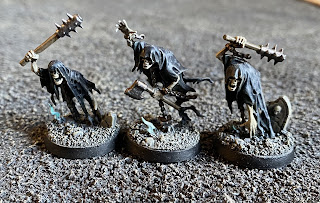 I actually bought a second set when I realised that I could make a ‘chap in the stocks’ rather than a ‘ghost who had brought their own candles’ using the same body, and to feed my bits box the rest. 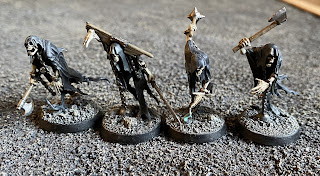 They were painted as part of the same ‘will it look too terrible if you paint dirty black robes by throwing a bit of drybrushing and a wash on it’ experiments as my previously posted Night Goblin Netter, and I can tell you it’s a success.
They would have been much faster to finish if not for me making up a large batch of diluted Vallejo Smoke (because I always make too little and end up having to make more mid-wash) that ended up being too dilute, so took several coats to get the coverage I wanted, and then had to spend some time cleaning up areas where it had dried weirdly...
Whilst I’m not likely to start playing Age of Sigmar any time soon (although with Cursed City on the horizon who knows), they’re stylistically appropriate to menace a Witcher or two, as well as standing in as wraiths for Frostgrave!
Tally:
17 vs 18 = -1

So close to being in the positive! And, truth be told, the next mini is pretty much finished already, so expect to see another post in the near future!