Well guess what I’ve been enjoying on Friday nights? 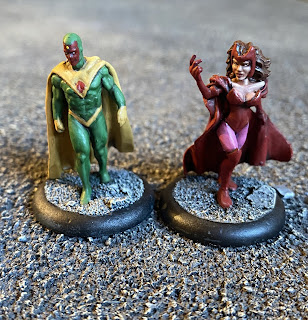 I wasn’t initially particularly fussed about watching it, but my wife insisted we give it a shot (as she is always wiser than I) and I was hooked from the first episode - as soon as it finished, I hared off to the basement to dig out some minis from various boxes of Heroclix! 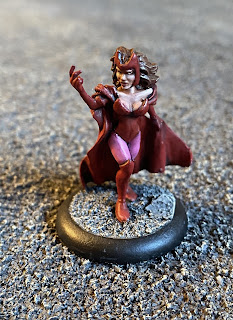 The Scarlet Witch I knew I had (I was always a fan of the Brotherhood of Evil Mutants, and so have figures of the majority of their classic members), but wasn’t sure about Vision. 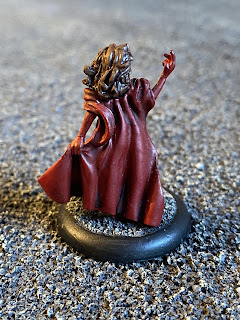 After much rummaging, it turns out the only Vision figure I had was the female version (from the Ultimates?), so I found an online store with a sculpt I liked for pennies.
Waiting for him to arrive, I started voraciously consuming back issues - definitely check out the Vision mini series if you enjoy Wandavision! I’ve since ploughed theough
Side note - when finding Scarlet Witch, I also stumbled on dozens of other figures I now want to repaint, and so was sidetracked into looking up Superhero ruleset, and also giving the X-Men movies a second chance... 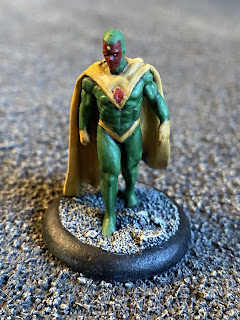 Looking at the Vision figure next to Wanda, you can tell that they’re from opposite ends of the release schedule - Wanda is I think from the first set, so I’ve probably had her for somewhere between fifteen and twenty years (terrifyingly), and her proportions are somewhat more cartoony than the computer sculpted Vision from a more recent release, with his slender limbs and sensibly proportioned noggin! 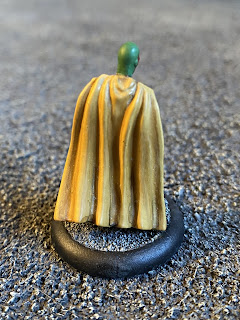 Ugh, I went way too hard with a soft tone wash after basecoating Vision’s cape, and the following weeks were just an exercise in trying to undo that. Part of me thinks I should have just stripped it and started again, but after a certain point it feels like you’re in too deep!

And yes, these two fairly simple paint schemes took weeks to compete, mostly because I wanted to paint them whilst watching Wandavision (thematic!) but hampered by the fact that I was paying attention to the screen too much to do any actual painting when it was on...

Done now though, and taking the Tally to:

With only one more episode to go, how do we think it is going to end? 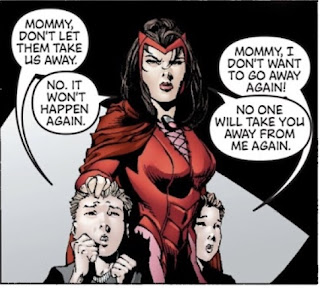