Someone's in the kitchen with Dengar...

...someone's in the kitchen I know (oh oh oh)... (I blame that episode of The Big Bang Theory with the work songs for this terrible, terrible intro)

Now that's out of the way, I think that makes it time for the embedded video of the MC Chris track about the Star Wars Bounty Hunter that I've recently painted, as is by now tradition: 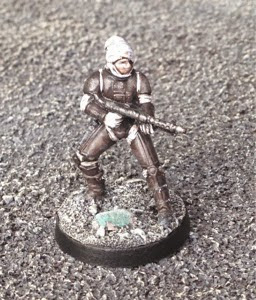 As is the case with the majority of my Star Wars miniatures, he was originally one of the bendy Wizards of the Coast prepaints, and suffers from some of the softness of detail that is so prevalent in the line. I still like him though, mind, despite his flaws... 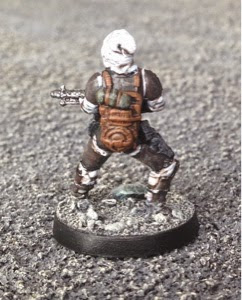 Admittedly, I realise that what little that I know about Dengar outside of him standing on the deck of a Star Destroyer largely consists of the first few chapters of 'The Mandalorian Armor', the audiobook of which I have fallen asleep to many times over (hence it only being the first few chapters), Wookieepedia browsing and a number of Robot Chicken skits, but into the project drawer he goes regardless!

As it's been a little while since my last post, I also have other things to report - whilst I was on Paternity Leave (which seems so long ago, even though it was only really a few weeks) I treated myself to some (more) goodies: 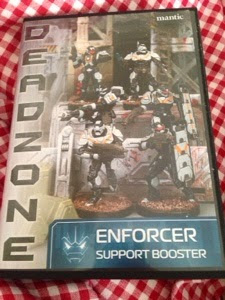 The new Mantic Enforcer Support Booster that I'd been considering buying, as the chaps with large shields and shotguns will make excellent Guardian conversion fodder when I start putting together some Cerberus Troops to kickstart the Mass Effect project; 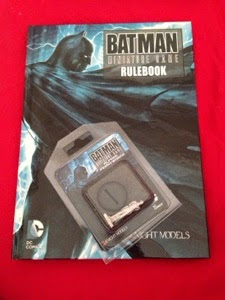 And the long-awaited rulebook for the Batman Miniature Game from Knight Models. Although I missed the cutoff for pre-ordering the book with the limited edition model (as I was still awaiting the arrival of my daughter when pre-orders closed, and I was still managing to be a good boy and not buy any toys), luckily I was able to source one through eBay not long after they were released!

1 miniature painted and 7 added to the mountain unfortunately takes the Tally in the wrong direction though, to:

However there are a couple of bits half-finished in the painting queue, so we might just be able to get the Tally balanced back to zero before Salute comes along and throws it out of the window...
Posted by myincubliss at 22:57