There are no men like me. There's only me 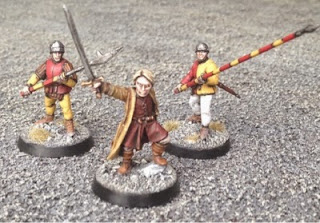 So, as you may have guessed, I managed to finish painting the Jaime Lannister conversion that I'd been meaning to finish for so long in order to face off against the tiny Ned Stark I had previously completed (in order to refight the confrontation in the streets of King's Landing when Jaime discovers that Catelyn Stark has taken his brother prisoner, hence him being in a long coat rather than full plate). The two generic lads flanking him are both minor conversions that I'd built a while ago that I largely painted whilst waiting for washes to dry on other miniatures... 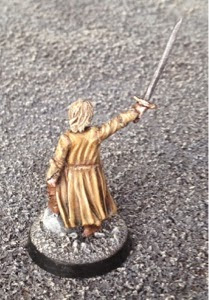 I hate my painting most days, but I eventually got his coat to a stage I was happy to stop and walk away from... 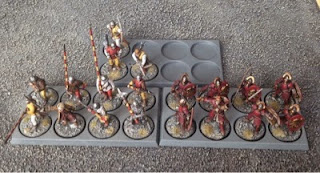 Having finished these three miniatures brings my total of painted Lannisters to neneteen men, although if I finish the next figure in my painting queue it will be nineteen and a half, if you catch my drift...
Posted by myincubliss at 13:57