The Last of Us…

…if by us, you mean the last of the miniatures I need to start playing a Last Days campaign: 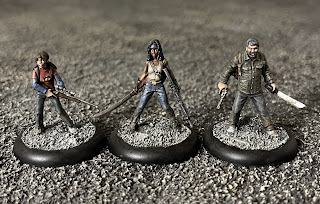 All from Hasslefree, taking inspiration from characters from The Last of Us and The Walking Dead. Fun fact, my daughter was impressed that I’d painted the same design on the shirt of a miniature as was on the shirt of a shark man on Dance Monsters, the Netflix show she was watching this morning.

My not-Michonne is a conversion too, as I couldn’t decide whether to use the samurai sword or the assault rifle arm, so decided to go for both! Don’t look too closely at the hand holding the gun, glueing that tiny contact point was a bit of a pickle. 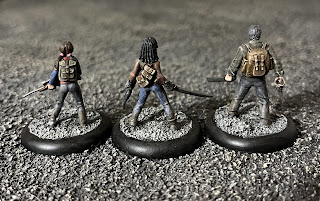 I also used my second favourite of the available backpack options, as I wanted to use the more backpack like one to make another loot token at some point in the future…
In terms of painting, they’ve come out rather dark haven’t they? Given the subject matter, I’m not super unhappy about that though. One thing that could have come out better was not-Joel’s shirt - there is a checkered brown pattern on the green shirt, that you can only really see if you get it about an inch away from your eyes. Ah well, done is done though, and I can start playing games now!
And so, a group shot: 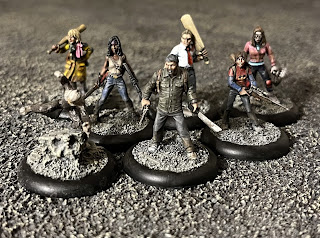 You see from the other members of the group why I needed to paint some additional miniatures to give myself some firepower!

The premise for the group is that when things went south, my Leader (and the helper monkey he’d been training - so sue me, I like Y: the Last Man) booked it out of the city to a farm where the young lady in pink at the back of the group had been taking a course to wait out the apocalypse, picking up a motley crew of hangers-on along the way.

So, the first finished miniatures of the year sets the Tally to:

Up next, a specific piece of scenery for the first scenario in my Seasons campaign, hopefully…