Who is the most important Avenger? 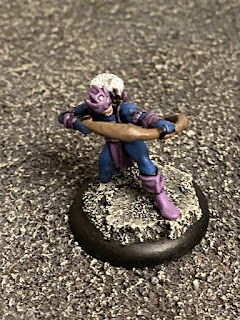 He’s been sat half painted for years, but watching the current Hawkeye show prompted me to get him finished. Also fun was attempting to persuade my wife that he’s called Hawkguy rather than Hawkeye… 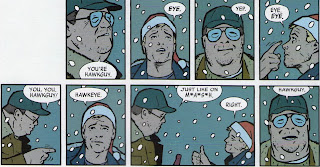 It’s a fairly tricky sculpt to get a picture of, given how hunched over he is. On the plus side, that means you can’t really see the lack of detail on his facial features, and my attempts to make him look more human. Part of me thinks I should have replaced the bow, but I think the original lump has a charm of its own (it’s an oooold Heroclix sculpt, so he’s good and chunky) 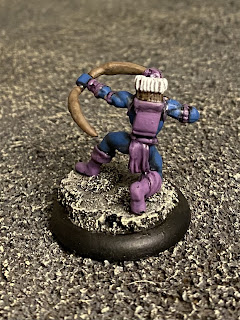 I went old school for his colour scheme, using the 1969 Marvel Comic Annual for reference, which was my first introduction to the character: 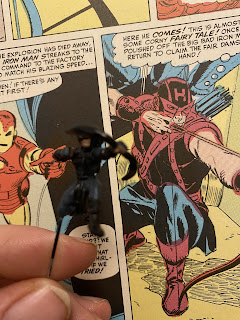 Once he was painted, I pinned him to a base I had handily prepared some years earlier - I was making some bases for The Walking Dead figures one past Zomtober, and this one came out too tall. Looking more like a typical ‘hero rock’ rather than post-apocalyptic pavement, so while it was no good for that, got stashed waiting for the right superhero to come along. 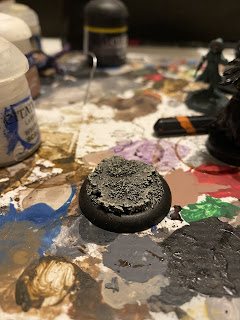 (This picture also got posted on Instagram with a caption claiming that I’d spent hours painting the invisible man, of course).
Finishing Hawkguy brings the Tally to:
43 vs 23 = +20
and also means I’ve got a half-decent spread of Avengers now: 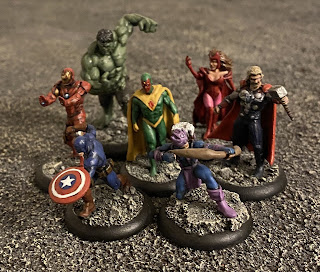 Although you can really see the difference in sculpting styles between old and more modern Heroclix, look how giant Hawkeye looks next to the more slender Captain America! I should probably get around to painting some baddies for them to fight too, so here’s to hoping that I find some AIM or Hydra minions in a bargain bucket at a future Salute…