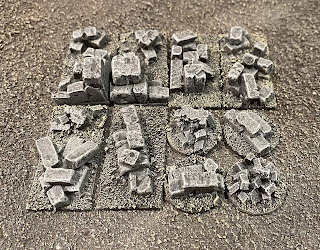 Well I guess rubble is more appropriate but I already had my heart set on the pun for the post title...

While I was on track to blast through the last few bits on my Rangers of Shadow Deep checklist, I somewhat hit a motivational wall painting all the barrels and bags and whatnot on my scatter terrain, which led to me going back to finish Final Fantasy 7 Remake (which was originally postponed so that I could paint my entries for last year’s Zomtober). And then the Episode Ardyn DLC for Final Fantasy 15 that I hadn’t got round to. And then Abzu, because it was pretty.

Then I got the call with my return to work date, and I thought I’d best get back to painting!

It was still a lot on my painting tile, so as well as dabbing at the bits on my list, I finished off these rubble bits (because finishing things is a great motivator I find!) - they’re from Fenris, and whilst originally designed to decorate bases of the their Rubble City kits, I bought some to make terrain for Dungeons and Dragons (hence the square bases) 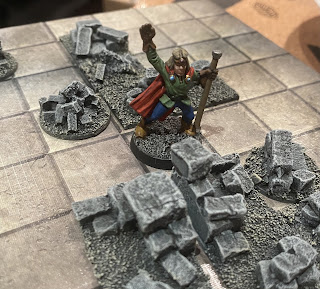 I diverged from my usual recipe for painting stone to avoid the rubble and the ground looking the same, highlighting the rubble up to a pale grey rather than my usual bone.

I mulled over several options for what sizes to make, but in the end settled on several 2x1 bases and four single tiles, to allow me to make a variety of shapes rather than being limited to ‘big square’ ‘little square’ and ‘rectangle’ 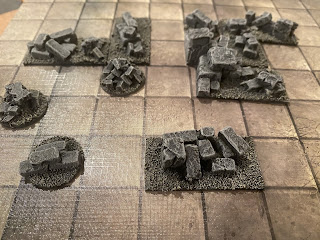 While primarily planned for RPG useage, I’m sure they will also get used for Frostgrave and Rangers of Shadow Deep: 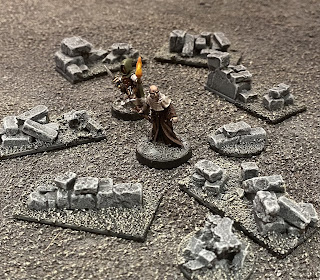 While the square bases are a little odd looking, nothing so terrible that I can’t live with!