Anarky in the UK 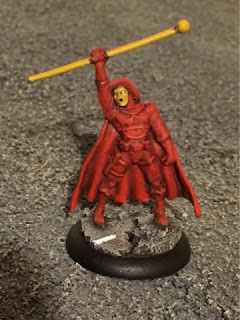 I like Anarky, the anarchist sometime foe sometime ally of Batman that wears his influences very clearly on his crimson sleeve (I seem to recall that in his first or second appearance he is pictured having a copy of V for Vendetta in his room). I enjoyed the structure of his first appearance, where it is only revealed at the end of the story that it is actually the teenage Lonnie Machin under the costume rather than his father as you had otherwise assumed from the story (which Batman realises based on how he takes a punch, I seem to recall). So I decided to paint myself a model of him! As I've occasionally mentioned, I'm mostly reading 90's Batman comics these days, which introduced me to the character, and having a rummage round some old boxes of heroclix, it turned out I already owned a miniature of him!

Like most heroclix, he was a little flimsy though, so after removing him from his large base I started out by removing his bendy staff: 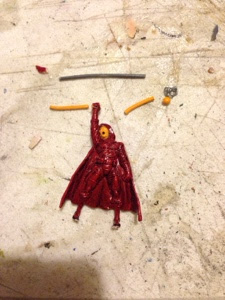 And took a donor pole from a Perry Miniatures sprue (from either a pike or a standard from the WOTR European mercenaries kit), rebuilding his electrified shock staff with the original knob on the end: 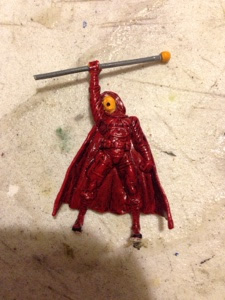 And then came base fun! At last year's Salute, I bought a number of resin bases to experiment with using with my official Knight Models Batman miniatures, but most of my rebased and repainted heroclix have been getting cork bases - not as fancy as the resin, but still a shade fancier than my usual sand and grit basing method. 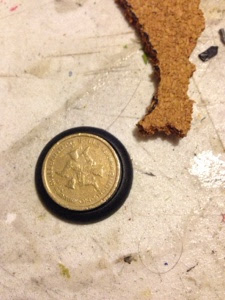 Fun discovery: rather than trying to trace the inside area of the top of a lipped base, a pound coin turns out to be the right size to use as a template! 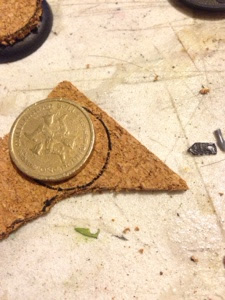 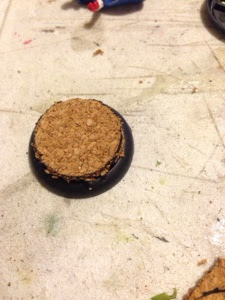 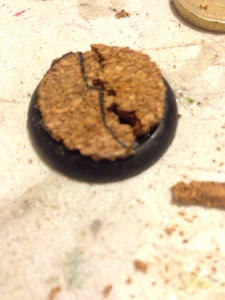 I cut the piece of cork in a jagged fashion (entirely ignoring my sketched guide line it seems) and then cut away some material from the bottom of one piece to make them different heights to add a little visual interest and make it look more like wrecked asphalt (as there seems to be something cataclysmic going on in Gotham every other month or so) - I'll add some road markings at the end of painting to drive this idea home (pun intended). This was all done several months ago, before Christmas I think...

Time passed, and I tended to carry Anarky around in my portable painting kit as something of a backup - he was base coated whilst waiting for other miniatures to dry, generally, until a week or so ago when I decided to get him finished!

Being mostly red, he was fairly straightforward to paint, although I did try to have several shades of red appear on different areas of the model by varying my highlights mix - his body is overall a darker red than his cape, for example.

I did briefly consider some of the alternate colour schemes for Anarky, when I was almost finished with him: like most comic characters, he's been drawn differently in various different appearances - in some his belt is yellow, others his holster is too; but at this point I was quite happy with how the different shades of red had come out so I decided to stick to my guns! 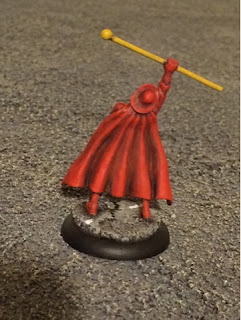 And after my comments on painting coats and capes in my earlier Elsa post, this cape was a delight to paint - if I were to do it again though, I'd probably try and make the application of the brighter tones broader, to make the whole cape look brighter overall, but I'm generally happy with how it turned out after adding a couple of brighter glazes to make it look more like I had envisioned!

Finishing Anarky takes the Tally to:

But what to paint next? Elsa and Anarky were my two 'on-the-go' figures, so what should take their place? Clear some figures out of the project box, or give in to my post-Salute craving to convert some more miniatures for the Game of Thrones / A Song of Ice and Fire project?