Of men and monsters…

The next two finished miniatures are both for Frostgrave: 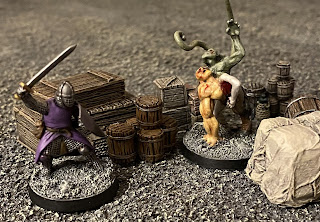 This knight is the first finished mini for my Frostgrave warband, ready for some solo play after Rangers of Shadow Deep (as I’m planning to play through the solo campaign from the Frostgrave Folio). He’s mostly Fireforge bits, with a couple of accessories from the bits box to make him look a little more like he’s got enough supplies to last him ranging round a frozen city (although admittedly it’s only a pouch and a knife, so he probably can’t go too long before he needs to nip home for lunch): 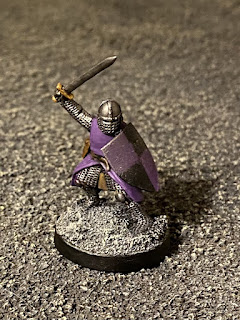 As my warband is a Necromancer’s, I’d initially planned to make my Knight look a bit more evil, with a wild looking bare head and maybe a club or savage mace rather than a sword, but my daughter decided that he needed a helmet to protect his head, and who am I to argue with a 6 year old? A purple and black colour scheme make him look a little sinister though, so it’s all to the good… 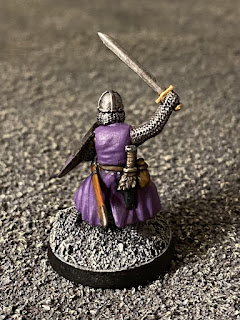 (He’s a little dinky, coming from historical sprues, but not so much that it’s so jarring that I’d not use him).
The other mini is my Alchemical Monstrosity, for the first scenario in the Dark Alchemy solo campaign. As it’s a creature that’s a hideous combination of several creatures fused together with a whipping tentacle attack, I ventured into my bits box for the parts to make my own back in the distant past of mid-January… 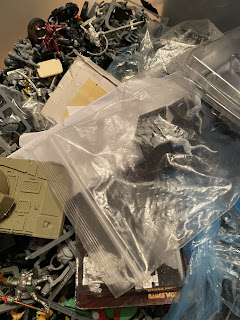 Proof that you should never throw anything away, I’d kept these tentacles that I removed from a Horrorclix figure at least a decade ago (it’s pre-blog I think, it’s the chap in the straight jacket above the letter ‘e’ in Lead in the banner at the top of the page!): 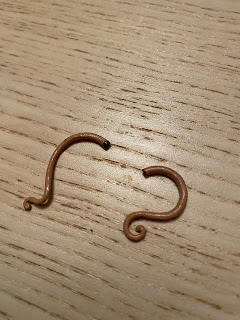 I knew I had the perfect body, some sort of shifter from Mage Knight Dungeons. I couldn’t find the one I’d previously stripped, so I had to dig through boxes to find another (I found the stripped one in parts this week while looking for something else, coincidentally, which I’ll probably not need a second of but that’s the way it goes sometimes) 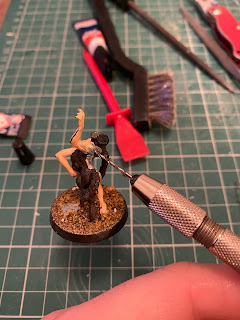 With copious scraping and some drilling and pinning, I had a very serviceable monster, that is incredibly difficult to photograph as it’s not really got a single best angle: 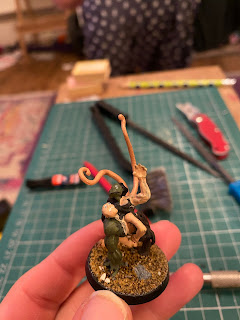 Then, ten months later I finished painting it! I’d originally put it on the back burner while I prioritised getting things finished for RoSD, but now we’re at the end of the year I’m painting whatever I can get my hands on as and when they take my fancy! 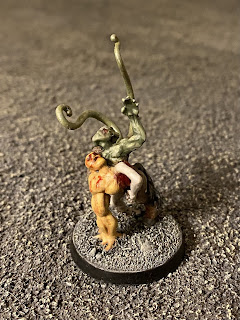 I went for very different skin tones on each area of the mini to try and really sell that it’s multiple creatures blended together, and where the detail is a little soft on the face went with bleeding eyes rather than trying to paint them in to add to the ‘flailing in its suffering rather than necessarily malicious’ vibe: 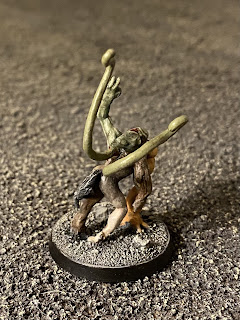 As well as the Alchemical Monstrosity for Frostgrave, it might also pull double duty as Possessed monster for The Silver Bayonet and as a … something horrible for D&D!
Finishing these two brings the Tally to:
37 vs 23 = +14
And I realise as I’m typing this, let’s me cross another thing off of the Challenge:
Posted by myincubliss at 17:37