So, after a month or so of having little time or motivation to paint, this last weekend I’ve managed to actually push a couple of bits over the finish line! Rather than making one long mega post, I’ll split it into three, the first of which being this: 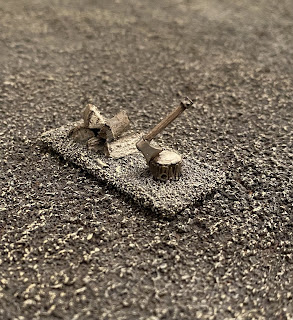 Fairly straightforward, when I saw the axe in a tree stump on a sprue of Bretonnian Men At Arms in my bits box I knew I had to make a little bit of scatter terrain to make my village look a little more lived in, so with some split dowel and a spare base we have this: 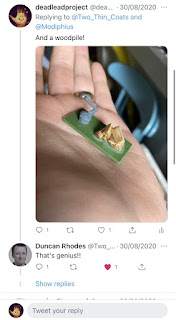 Seen here as a WIP on Twitter with our Lord and saviour Duncan Rhodes saying nice things on my birthday last year (which gives you an idea of just how long it takes me to finish things sometimes). So, nearly a year of drybrushing later, I get to cross it off my Rangers of Shadow Deep list:
Soon, Rangers, soon… (although Timehop informed me the other day that it’s now been a year since I finished my Ranger and companions, so not so soon after all)
Mild spoilers for the next two posts though, some more things are getting crossed off this list!
In other news, I’ve just sold some minis on eBay (to pay for a Hellboy Kickstarter expansion) so the Tally has swung slightly to:
19 vs 16 = +3
Next time: more finished objects!
Posted by myincubliss at 22:09