As an adult, Christmas can last the best part of a month as you catch up with people that you weren't able to exchange gifts with over the actual festive period. This was the case with Uncle Johnny (a name that he's only actually known as on the pages of this blog), although we weren't actually able to get all of our wives and children in the same place at the same time, so ended up with more of a 'flying visit with rapid fire exchange of gifts' in the end.

Thus I received this: 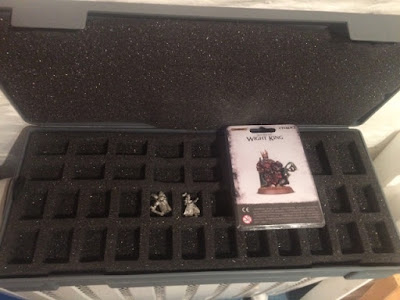 A figure case along with a very lovely Wight model that I have coveted for some time (although as ever, I've seen a rather nice Inquisitor conversion using this figure as a base, so I'm conflicted as to whether I should build him straight or chop him up for bits), which brings the Tally to:

You'll also notice a couple of other shinies in the case, which weren't part of the present, but a couple of broken miniatures that John brought over for me (because he's just that nice - also, some Micro Sol and Set). I'm not counting them as miniatures for the Tally, but as bits for my bits box, and got to musing - I love broken miniatures.

When I were naught but a youth, I loved broken miniatures. I mean, I still do, but moreso then. Being young and poor, I would often buy lots of broken miniatures and assorted bits on eBay, and conversions would be fuelled by being forced to make something out of these disparate broken bits. These days, there are so many excellent plastic kits, and people making some quite frankly remarkable kitbashes, but there's still something to be said for rooting around your bits box and jury-rigging a finished miniature out of parts that might otherwise have been thrown away - doubly so if it's the result of someone else's abandoned conversion! Models with hands loped off, inexpertly removed heads, those were the stuff dreams were made of. Maybe I've just gotten lazy in my old age - tempted just to copy other people's conversions by ordering the bits I need, rather than actually exercising the old creative juices? There's an inquisitor conversion half-finished in a baggie in the basement that was inspired by trying to salvage a Commander Dante body that came into my possession missing his weapons and half of one arm, maybe I should dig it out and finish it off...

In other hobby related news, I've built the No Grade 1/144 Gundam Wing that I got for Christmas: 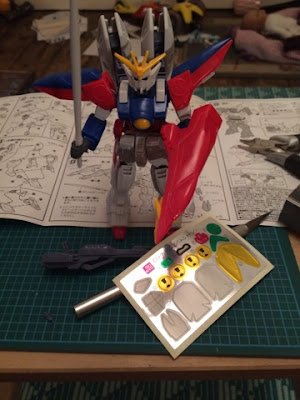 I'm not a big fan of the stickers (except for the eyes) so I'll probably order some Gundam Markers and go back over him at some point to finish him off. I've reached something of an impasse in the ruleset I was writing, so I probably need to order some more kits and try them out to see what the obvious things that I've missed are!