Oh if I only had some braaaaaaaaaainsss...

Playing catch-up a little this week, we have two finished miniatures for my week 2 and 3 Zomtober entries!

First is the next of the Studio Miniatures Wizard of Oz themed Survivors box, a pitchfork wielding vagrant with overtones of Scarecrow: 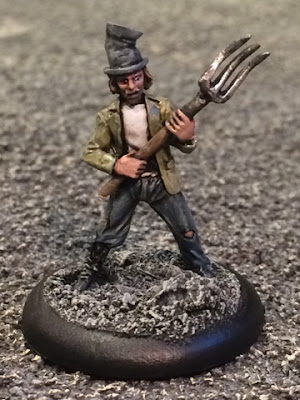 Good fun to paint, even if the detail on his face was a little squiff (although it might just be that I've been spoilt by having painted Hasslefree miniatures, that even my modest level of skill can make look quite nice), but judicious application of a five-o-clock shadow came out looking pretty good I think and distracts from that! His eyes are a mote wonky, mostly because my daughter chose the exact moment to grab my chair and yell boo that the micron pen was making contact with miniature... 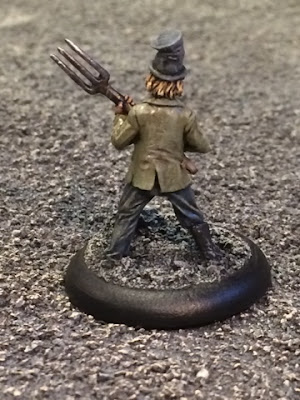 He got straw blond hair to suit the Scarecrow theme, and his clothes were painted dirty and worn partly for theme, partly because there's just something satisfying about scrubbing on some weathering with a ragged old brush!

The other miniature offered up this week is this militaristic zombie: Back when I got back into the hobby in my early twenties, I was inspired to start a zombie project after seeing all of the great stuff happening over on the Lead Adventure Forum (which I'd joined to ask a member a question about where they'd gotten some miniatures that I'd stumbled on while googling for AEWWII miniatures). To get started, I bought a bunch of Horrorclix zombies from a nice guy in Spain (username PredatorPT iirc), and this chap is one of the last pair of that bunch to get painted (the other of which is currently sat half finished on my desk). The Horrorclix zombies are a mixed bunch - variable sizes, wildly variable sculpting quality, but they got me started and over a hundred zombies later I still like them (I think the Zombie Ventriloquist is still one of my favourite members of the horde). 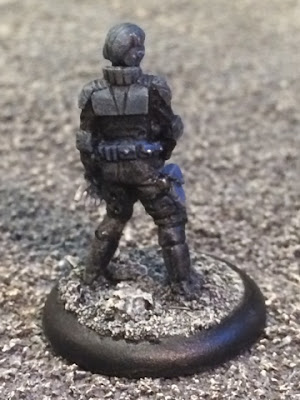 This particular zombie is one of the better sculpts though - fairly crisp detail, characterful, but straightforward enough that he looks great with three or four colours and some weathering! Painting was fairly straightforward: I basecoated everything, weathered the lot, and then washed and highlighted anything that wasn't black before coming back to do a pass to pick out a couple of small details like the handle of his holstered pistol, the buttons on his pouches, and his teeth! I was tempted to apply some blood effects (as it's been a while since I got to play with my pot of TCR) but figured that given how dark overall the model is, you wouldn't really notice the blood on him... 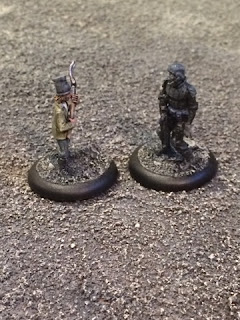 Here are the two miniatures squaring off - you'll see what I mean when I say that the Horrorclix zombies are a little big! Mixed into the crowd though the scale difference isn't quite as noticeable...

Coming next week:more of the same, hopefully!
Posted by myincubliss at 21:21