Finally managed to get my hands on the Nurgle Champion I wanted to lead my Path to Glory warband thanks to eBay and a chap in New Zealand: 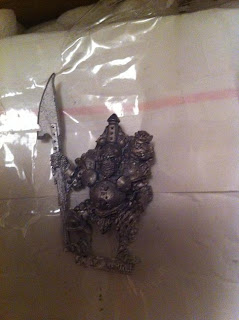 All I need now is the Spawn and I'll have all the miniatures I need to make my warband, and there's an auction on eBay ending tomorrow with the bits that I need for that conversion...

Alas, no other progress has been made, as we're still unpacking, hence the 17" pile of White Dwarfs currently in the middle of the living room: 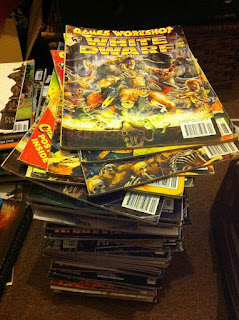 That's not all of them though, as there are still more to be found in boxes yet unpacked, and that's nothing compared to the 29" pile of rulebooks in the corner... Once everything's found, it'll get put on the correct shelf, and then I can start unpacking the boxes labelled 'tools & toys' that I've been saving as a reward for myself for unpacking every other single thing we own... Speaking of things found, I found this in my Space Marine Codex: 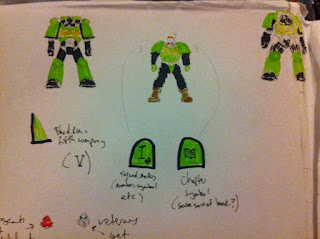 A colour scheme chart for a Space Marine army that still consists of a single half-painted miniature. And yes, although there are various online colourscheme editors available, I did trace this and colour it in with felt tip pens. That's just how I roll.
Posted by myincubliss at 22:47