The year of the plague (doctor)

Whilst it may have been a while since my last confession, do not think that I have been idle! Although admittedly the things that have taken up most of my time aren’t finished yet, so you won’t see the fruits of that this post...My Salute order from Fenris arrived, and had a free miniature in, taking another point off of the Tally: 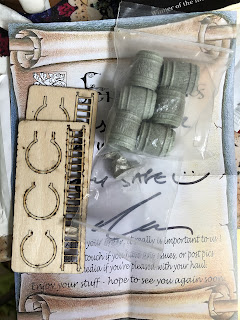 (I’ve also placed and received another order since that I apparently forgot to take any pictures of, but it was some walls and rubble, so no effect on the Tally)The chum who waved Rangers of Shadow Deep under my nose was considering ordering a couple of Frostgrave sprues to try them out, so I offered to trade him one of my Soldier 1 sprues if he ordered a couple of Soldier 2, so I find myself in possession of this bunch of lovely ladies: 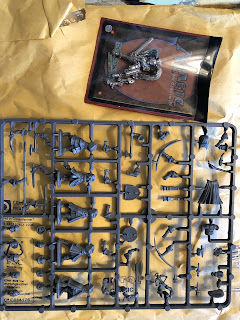 He also threw in Mad Donna, because my friends are generous to a fault. The box I delivered the week before: 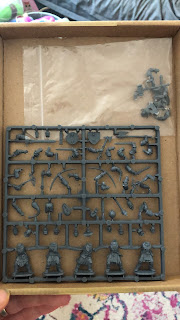 I threw in a couple of interesting bits from the Barbarian sprues as well in case he fancied taking a barbarian companion for his own solo ROSD games...At ten to midnight on the day that Partizan would have been, I found myself idly scrolling the Crooked Dice web store, and ordered myself a Captain Scarlet lookalike as it was on sale (which has led to me spending the last week or so of lockdown watching the original series while I do the washing up, and considering ordering a load more to do an entire Spectrum force, but I’ve managed to hold off thus far as I’ve only undercoated this first one so far!) 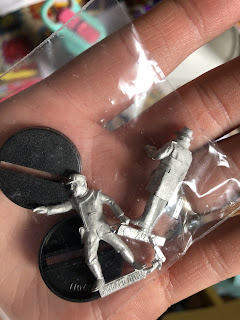 My order came with another freebie as well, tugging the Tally even further into the red (or should that be scarlet)...Finally, I ordered a pack of Copplestone Giant Spiders that I’d need for the first couple of ROSD scenarios, seen here with Captain Scarlet for scale: 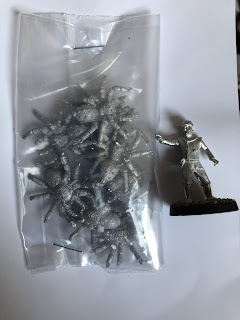 They’re horrible, in a good way. I thoroughly enjoyed bending their little legs and mandibles around to get a variety of poses!It hasn’t all just been me gingerly receiving packages at arms length from the postman though; having vowed to any gods that would listen that I would dedicate myself solely to finishing miniatures and terrain needed so that I could play the first couple of Rangers of a Shadow Deep of course the first thing that I’ve finished isn’t actually for that: 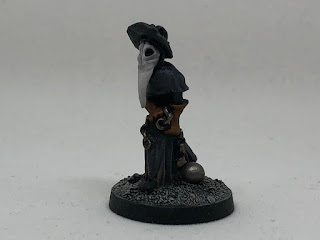 A plague doctor from CP Models, that I have no real need for but it caught my fancy, given the state of current affairs. Maybe I’ll claim it’s the first model in an Assassin’s Creed miniatures project that I haven’t started yet... 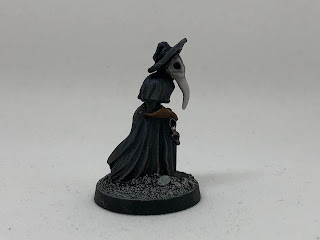 Lots of dry brushing to grubby him up as he stalks his way through the plague choked streets made this a relatively quick and satisfying paint job to complete, which brings the Tally to:3 vs 68 = -65What’s next? The miniatures needed for ROSD are half completed, so shouldn’t take much longer to get over the finish line. I’m about halfway through painting the buildings that I knocked up for the first scenario, but I find painting terrain much less entertaining than miniatures, so I’m jumping back and forth between the two currently...
In other news, after killing the blogger app, it seems they’ve now updated it so that it’s almost unusable in Chrome on my iPad. This post was brought to you by emailing the post to blogger as suggested by a quick google, that not working at all, and so flip flopping between various applications and drafts copying and pasting chunks, then doing it all again when none of the pictures worked. How is everyone posting? And if you’re also having to jump through these hoops, how do you deal with that frustration?
Posted by myincubliss at 00:02