Ooh, writing that title just makes me want to go and rewatch The Day Today!

So, week 2 and another post on schedule! Work has been a bit much this week, so I wasn’t sure if I’d have a post ready in time, but what else are Saturday nights in October for if not frantically trying to finish and photograph miniatures? So I present to you the Channel 7 news crew: 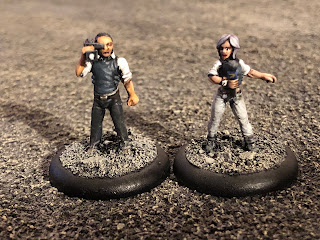 These two are from the Frothers Zombie sculpting competition winners set from about a decade ago, so I’ve procrastinated something fierce on getting them done!

I’m having a bit of an off year on painting faces currently, a trend which seems to have continued here. My glasses prescription changed, and I’m painting without my proper light (so that I can hang out near my wife), which might have something to do with it...

As ever, I turned to my wife to select a hair colour, and she chose a silver purple (as one does). She also suggested mixing in some silver paint to give it a slight sheen, but that didn’t really do a lot unfortunately... 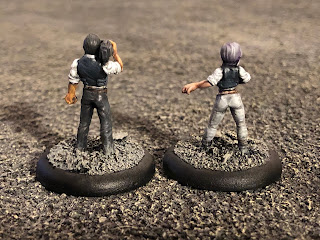 In the set of zombie rules that I’ve part-written, I included some rules for these figures - they esssentially act as loot tokens, but if you get into combat they can be lost (or if you’re of a more callous mindset you might consider them ablative armour...) 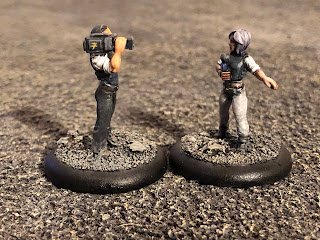 And now a profile shot, to show off some shaky freehand (although not the only bit on show - as well as the presenters microphone, there’s also a shaky watch face on her watch!).

Another week, another shot in the arm to the Tally: