Are you still there?

Ah, Spindle Drones, in my head they're something of a mashup between the turrets from Portal and a sinister, unknowable alien intelligence. I've not read the novel yet, so I can but hope that they turn out to be dorky and adorable pets... 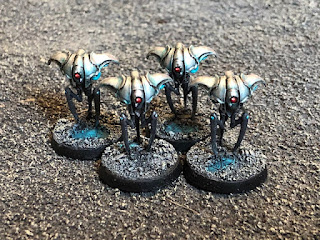 This paintjob was another classic case of millions of layers that end up looking like far less effort has been put in, but that mostly comes down to failed experimentation. My initial concept for their colour scheme was to have the legs look non-metallic (to look more alien, less robot) while their 'carapace' would look metallic, but with an unusual sheen. I'd originally planned on just giving the metallic coat a wash, but then Contrast paints came out so I thought I'd give them a try. I toddled off to my local GW and grabbed a pot of Aethermatic Blue. I applied a coat of the Contrast paint over a bright silver base, and found the effect a little timid, so ended up going way overboard on the next pass, leading to having to take multiple passes trying to glaze it back to closer to what I originally had in mind. Obviously, this didn't go to plan, so I had to keep going back re-applying the lining separating the plates, then glazing it with Contrast again... Eventually, it came to a point where I decided enough was enough, and I moved onto picking out the details. 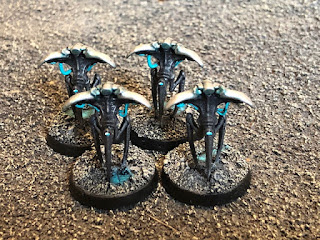 For the central eye I went with classic evil robot red (I imagine them patrolling with their eye a purple colour until they detect a foe, when it turns red, maybe a tiny alarm goes off), whereas for the cabling and lights of their leg joints I decided that the key colour of the alien nature of the fortress would be Privateer Press' Arcane Blue, to reflect the ghostly blue seen on some of the tiles.

Speaking of the tiles, I forgot to mention the basing in my previous post! They're mostly based to match the majority of my existing miniatures, but with the addition of randomly arrayed tessellating tiles meticulously cut out from plasticard: 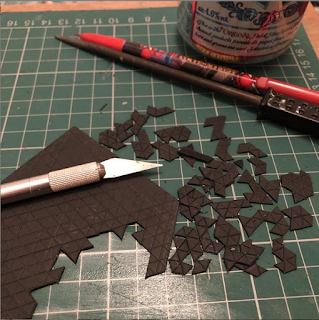 that then got painted with Aethermatic Blue Contrast paint and Arcane blue, in order to tie them to the Spindle Drones and the aforementioned blue tiles that I may be misremembering as appearing on some of the tiles.

Completing these brings the Tally to:10 vs 27 = -17Blackstone Fortress completion stats:Explorers: 0/9Enemies: 8/35