Well, to a certain degree of boys: 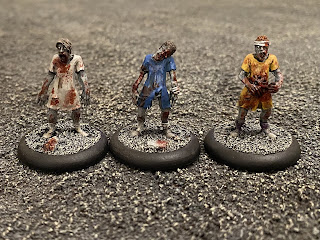 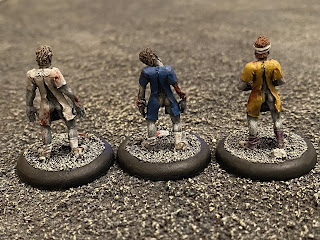 I love the Studio Miniatures zombies, they’re beautiful sculpts, but they sure do love to recycle sculpts with slight details changed. I mean, I know the classic GW Nurgle Champions did the same thing, but with them at least the majority of the model was different rather than just moving the arms and adding a bandage to the head... it’s not a dealbreaker, and not something you’d notice once they’re in the horde, but something that grabs your attention when you’re looking at them in a small batch like this.

Minor grumbling about sculpts aside, finishing these brings the Tally to:

...or at least it would have done if I hadn’t won a competition on the Wargames Foundry Facebook page, where they sent me enough miniatures to destroy any hope of crossing off ‘end the year with the Tally in the positive’ from the Challenge this year: 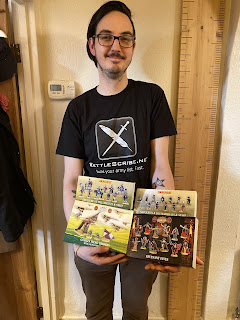 Once these are factored in, the Tally plummets to

Which means I’d need to paint (brief pause to do some quick mental maths) exactly one miniature a day for the rest of the year, which while pleasing how exactly it matches might be a tall order, having a full time job, two children, and dare I say it other hobbies too...

Even if I don’t get the Tally back into the positive, I’m still shooting for the ‘average one miniature a week’ goal, which at one miniature every three and a bit days still seems manageable!

So, what’s next? More zombies, of course, and given that I’ve painted two thirds of a pack over the first fortnight, you can probably guess what’s coming next if you’ve been on the Studio Miniatures site... after that, back to making scenery so that I can play Rangers of Shadow Deep, although that doesn’t help with the painting totals challenge...