Three posts in a week!

Another little chap marches off the painting tile, this time a Night Goblin Netter painted for Paula_she_creature’s Instagram contest - I had this miniature on my painting tile already when I saw the contest (as I was considering trying out a quick Drybrush to do black robes speedily) and thought I’d take part to make up the numbers! 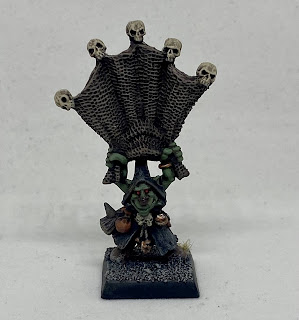 Ah, that old school charm!
To my shame, this is the first fully, actually finished Night Goblin. Despite having a couple thousand points of them in various states of basecoat. It’s been so long since I’ve painted a Night Goblin at all, so had to try and figure out how to do the skin again - if I were to do it again, I’d probably go brighter, truth be told, but the deadline for the contest was creeping up so I thought it was better to just finish him off! The nose was a few coats of a crimson wash, which didn’t come out as red as I’d hoped, but I think reads like I was hoping at tabletop level. 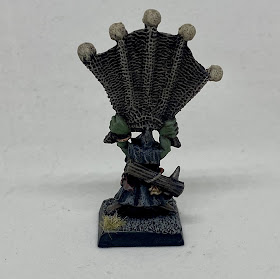 So, one gobbo finished every ten years, at this rate I’ll have a fully painted army in... oh, centuries time...

This one does take another dent out of the Tally though:

Slowly but surely clawing my way back into the black!