A kobold in the hand is worth two in the bush?

So soon after my last post, I've finished some foliage to block line of sight and generally make my tabletop look a little livelier (modelled here by my daughter's repaint of a Doctor Who miniature): 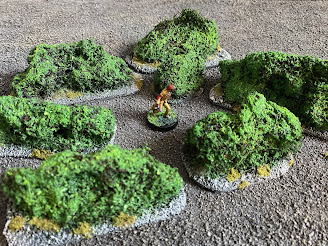 I decided I wanted to make some bushes mostly because I felt that it would help fill the table for the second Rangers of Shadow Deep scenario from the rulebook without having to make quite so many trees!
Like so many terrain projects, inspiration for these came from a Lukes APS video on youtube, except rather than using Brillo pads, I used wire wool (excellent for cleaning paint from paint tiles and blocking mouseholes alike) teased out into interesting shapes and then hot glued to a board base with it's edges bevelled: 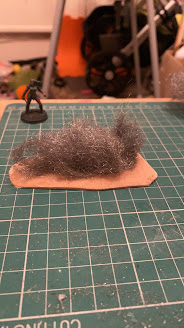 In hindsight I should have sanded the edges of the bases down after bevelling them to get a smoother transition to the table, but it will be fine either way... 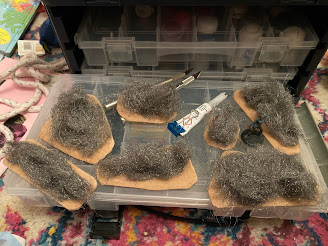 I made seven bushes overall, ranging from a dinky little poofy bush to great big overgrown out of control hedges - the style I'm going for is those overgrown gorse bushes that if you fell into drunk as a teenager you'd know about it the morning afterwards!
They then (after coating the bases with glue and sand) got spray undercoated black, and the branches got several heavy drybrushes of brown: 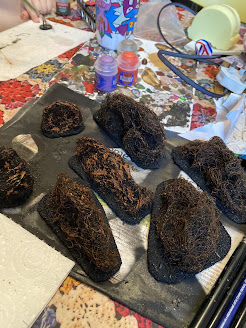 The paint must still have been wet in that last picture, as each time I gave them a coat, it would dry to looking almost invisible, as you'll see in the next picture... 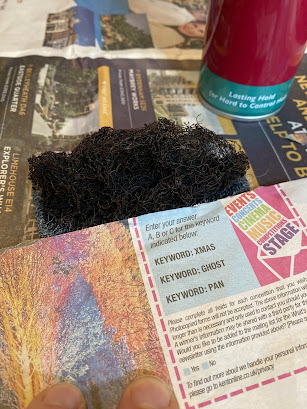 There's a saying that goes something like 'proper planning prevents poor performance', which isn't what I did here. In hindsight, I should have finished of the bushes and painted the bases last, so that any overspill could easily be painted over, but instead I drybrushed the bases first (with the usual selection of  Wilko tester pots that I use for painting terrain), as that was something I could do whilst sat watching a movie with my wife. Ingenuity will overcome, though, as when it came time to sprat my bushes with hairspray to stick on the flock, I knocked up this newspaper shield to protect the finished bases.
I mean, it didn't work very well and I abandoned it fairly quickly, but still, it's the thought that counts right?
Then it was just a case of sprinkling on my home made flock with the help of my tiny assistant and using an old brush to brush away any overspill that ended up stuck to the bases: 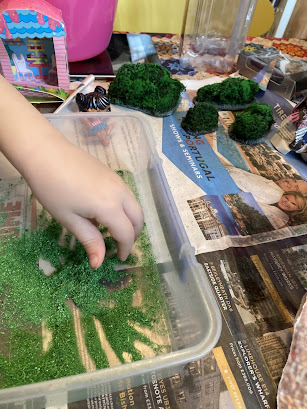 Home made flock you say? During lockdown, we made flock by bashing together sawdust, paint, water and a little splash of washing up liquid, again following instructions in a Lukes APS video. 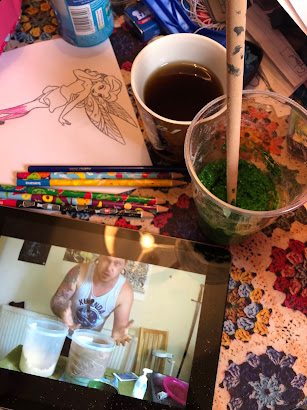 We made three shades, so that we could go for that Foundry system style of shade, mid tone and highlight: 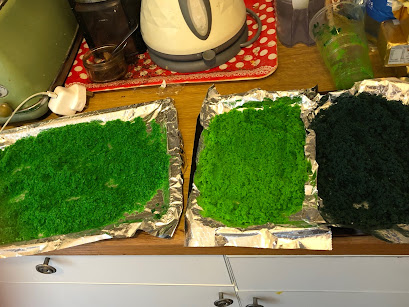 The colours were selected mostly by rooting around in my wife's box of acrylic paints, and mixing from what I could scavenge from there! We left them to dry for several days (which wasn't ideal, as I'd used most of the baking trays we own to dry them out on), then bagged it up to await it's time to shine... which took a couple of months more than expected, as having to go back to work put something of a dent in my hobby time!
Which brings us back to the present - here are the bushes with a couple of coats of hairspray and flock: 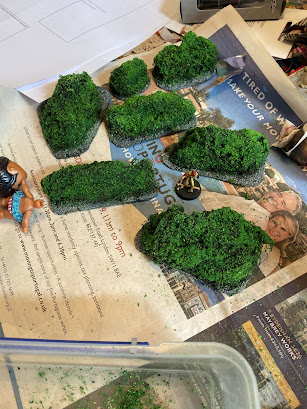 We started with a light sprinkling of the darkest flock, followed by absolutely dousing it a couple of times in the medium green, before finishing it off with the lightest sprinkling our our yellowish green at the highest points.
Daughter also decided that she wanted to flock the bases of the miniatures she had been painting: 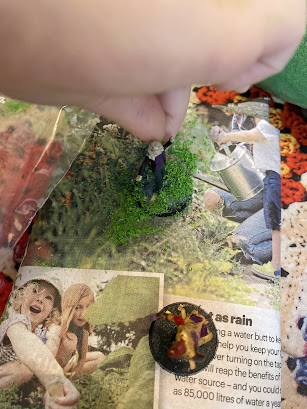 Top tip - paint with your children! Bonding is all well and good, but it's also surprising what ideas you'll pick up! For example, I stole my new method of painting light blond hair (as seen recently on my Rangers of Shadow Deep Tracker) using an incredible pale flesh tone as the base from my five year old, who looked at the paint and decided that was what colour she wanted to use, rather than being bogged down with two decades of 'painting knowledge' and so always painting things the same because it's in your head as the 'right' way to do it...
Then it was just a case of sealing everything so that the flock would stay on! I'd already scavenged a spray bottle with a 'mist' function from work just for this purpose that had originally held spray sanitiser (thanks Covid!), but unfortunately after the first test spray, it stopped misting and instead shout out watered down PVA in a strong jet that knocked flock out of place with wild abandon. Somewhat frustrated, but determined to continue, I instead sprayed the mix onto the back of a spoon so that it could drip down onto the bushes and hopefully not dislodge too much flock: 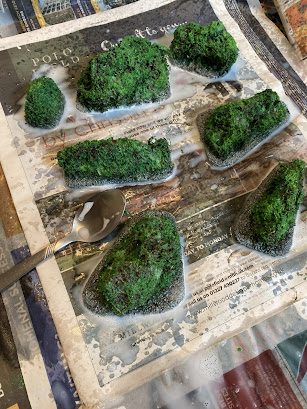 The advice in the video I watched was to absolutely drench it, for maximum hardiness, but between the spray bottle malfunction and this much wet glue all over it it left me with some bare patches both on the bushes and on the bases: 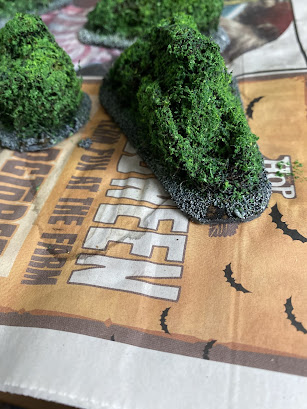 I did briefly consider going back over the bushes with another layer of flock to cover any sparse areas, but decided against it, as having the occasional bit of exposed thorny branch was entirely within the scope of what I was aiming for, and if anything makes these bushes look less inviting (this is why they block movement rather than just being rough terrain that models can move through at half speed). The flock also dried much lighter than my initial pictures, but I guess that's to be expected, with wet things often looking much darker...

The bases were an easy enough fix though - any bald spots got touched up with the base grey. Weirdly, the highlight had been dulled on them, so they got another drybrushing with the cream tester pot, and then adding some moss and grass to both blend the bushes into the ground to make them look more like part of a living ecosystem, as well as covering any dodgy spots where there was no basing material, or I'd missed a bit when brushing off the loose flock! 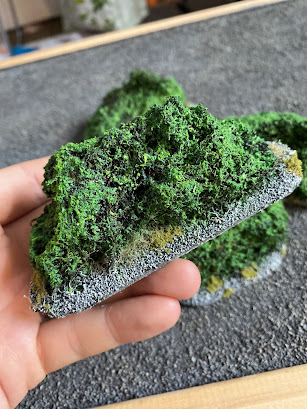 So, that leaves the checklist of things to complete before playing the first scenario (you'd never guess that I'm an Operations Manager in real life would you) as:

I'm halfway through making the trees currently, but I might switch gears and work on something else for a bit rather than ploughing through the more labour intensive tree making...
In other news, it's my birthday on Sunday, so feel free to send Blackstone Fortress Expansions, Rangers of Shadow Deep books and Frostgrave miniatures to the usual address!
myincubliss at 09:00
Share